This past weekend was the 10th annual Vendy Awards in NYC.  The Vendy Awards is a celebration of the city’s best food vendors, and it helps raise money for their cause. From their website:

There are more than 10,000 street vendors in New York City — hot dog vendors, book vendors, street artists, and many others. They’re small businesspeople struggling to make ends meet by working long hours in often harsh conditions.  Most street vendors are immigrants and people of color and often face discrimination though unjust legislation supported by established business interests. In recent years, vendors have become victims of New York’s aggressive “quality of life” crackdown. Denied access to vending licenses, they receive $1,000 tickets for minor violations like vending too close to a crosswalk — more than any big business is required to pay for similar violations.

The event was held on Governer’s Island, and it was the perfect place for it. I’d never been there before and it was beautiful. We took the 11 am ferry, so it was free (it’s only $2 round trip if you catch an afternoon one). The amount of bees was a little alarming though. I don’t think they bothered any people, but the way they were attacking donuts was like a scene out of a cheesy horror movie. I got a picture of a donut with like 5 bees on it, but there were others that were totally covered and you could barely see any donut. #beesTakeManhattan 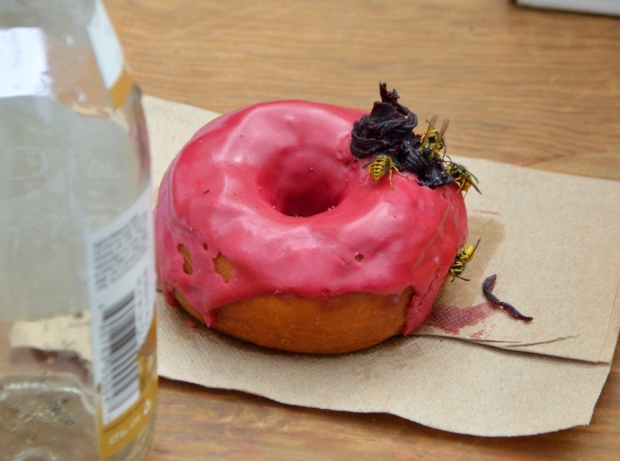 The very first thing I had was a Maple cucumber-mint slushy from Snowday. It sounds weird, but they were little samples so I figured why not. I’m glad I did because it was really light and tasty. My dad also tried the maple grilled cheese and said it was good. Snowday won the Rookie of the Year award, and what’s really neat about their truck, is that they are operated by Drive Change, a non profit that builds and operates locally sourced food trucks that hire, teach and empower formerly incarcerated youth.

A few steps later we were handed falafels from King of Falafel & Shawarma. They were seasoned perfectly with a crisp outside and soft chewy center. I may have had 2…

Chickpea and Olive was the first vegan vendor that we saw and their beet burger blew me away. My dad (very much not vegetarian) liked it so much that when we got home he tried to recreate it. I know I didn’t try the other Best of Market nominees, but I thought that Olive and Chickpea was a guaranteed win because the burger was amazing.

Somewhere in between the beet slider and getting drinks, we grabbed some ice cream samples from Alchemy Creamery. First I grabbed the Almond Marzipan, and then I tried the Salted Peanut Butter. Both were really, really tasty. As we were leaving I kind of wanted to grab another peanut butter one, but I was afraid if I ate anymore I might sink the ferry. =/ The other (non vegan) ice cream vendor had 3 different really funky/delicious sounding flavors and they won the best dessert category. I think maybe if Alchemy Creamery jazzed up their presentation if they could’ve won.

Not going to lie, I was a little biased knowing that the Cinnamon Snail was going to be competing, but it was amazing that there were 3 other exclusively vegan vendors and others that had vegan/vegetarian options. And luckily they were all in separate categories, so they all got my vote!

I mean how could you not think that this Vanilla Bourbon Creme Bruelee Donut isn’t the best thing ever. (Sidenote: I forgive you Cinnamon Snail for my temporary bout of diabetes.)

The VIP tickets were totally worth it. We only waited about 5 minutes to get checked in and then got to eat for a whole hour before general admission was opened up. This was kind of a good and a bad thing. It was wonderful being able to walk around with no lines and not many people, but at the same time, I wanted to stuff my face before the lines got long and I felt like I was going to explode in that first hour. I almost held off on getting food from NY Dosas, but I made a vow (to myself) to try all of the vegan offerings, and I’m so glad I did because the flavors were out of this world. I even got an explanation of how they’re made and got to take pictures (see gallery below) of the process.

Dosa with coconut and mint sauces and vegetable soup

The rain held off for a good portion of the day, but we decided to leave when it really picked up. We took a little break to let our food digest and explored the island a bit (a post of the art galleries coming soon), so by the time it started pouring we were a bit cold and tired. We missed the awards, but we in the car home I was ecstatic that the Cinnamon Snail won the Vendy Cup! Sorry if this post is sounding a little fan girl-ish, but well, they totally deserved it. It might not be fair for me to judge considering the fact that I didn’t try the meat dishes, but it makes me so happy that a panel of judges found a vegan dish to be the best. Whenever people say “I don’t like vegan food” (cue my inner eye roll) or other things about how boring it is I just want to explain that it doesn’t have to be boring and bland. The Cinnamon Snail has proved that vegan food can beat out some of the best meat dishes based on taste alone. 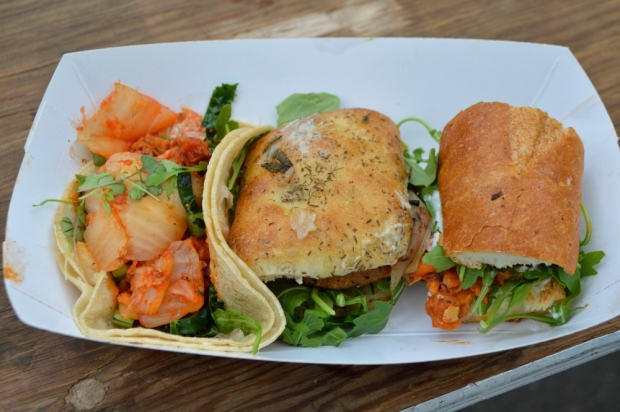 I heard some people outside of the gate saying there’s no way they could eat enough food truck food to justify buying a ticket. Well, there was also All You Can Drink beer, wine, soda, water, tea, coconut water, juice, etc… And besides walking around eating all day, you’re supporting a cause and helping people. This was my first year going, but I’m already looking forward to next year!

All you could drink beverage table

Random lady who I don’t know, nor did I ask to take her picture, eating snail food.

Dosa with coconut and mint sauces and veg soup