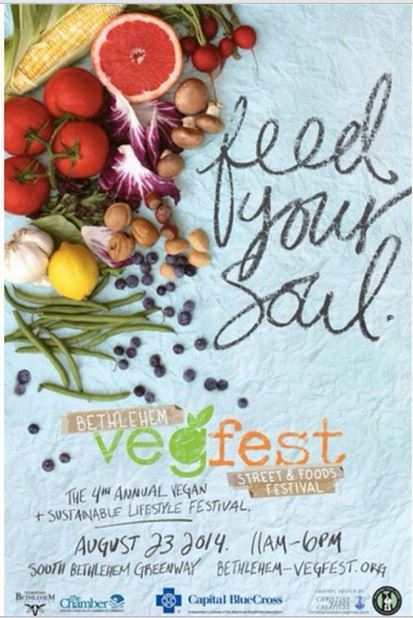 It’s been a week since this year’s Bethlehem VegFest and I’m already excited about next year. Just like last year, being in a place where you know everything is vegan and nothing is off limits is an amazing feeling. There was no walking around looking for a place that sold only salads or veggies, or possibly a tofu dish. There was real, delicious food, and it was all vegan.

Aside from the food, they also had speakers, cooking demos, yoga, music, and activities for kids. I was really impressed with the speaker line up, but unfortunately we didn’t really sit and listen to anyone since the kids wanted to walk/run around. We also missed the yoga flash mob, which I was a little bummed about, but we totally lost track of time and I realized it after it was over. I’m already planning a better game plan for next year.

The biggest thing I was looking forward to was eating from the Cinnamon Snail. They were going to cater our wedding, but the logistics didn’t end up working out, so when it was confirmed they were going to be at VegFest I knew we were eating there. The line was always long, but it moved fast. 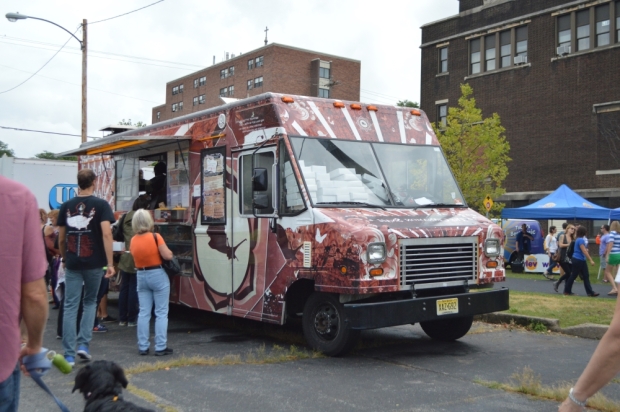 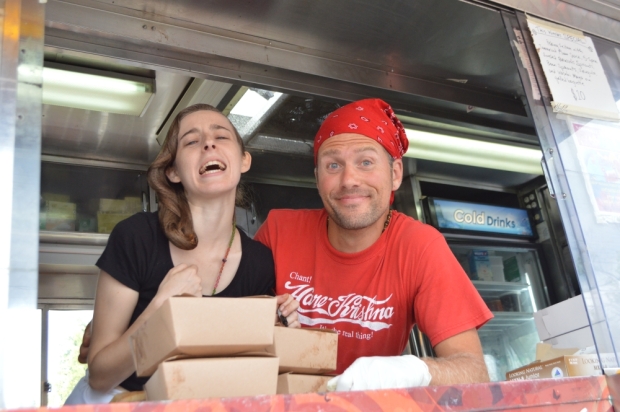 Both burgers were humongous and so incredibly delicious. Seriously folks, if you’re ever in NYC and looking for lunch, hunt these guys down. This was the most filling, gourmet vegan food I’ve ever had. 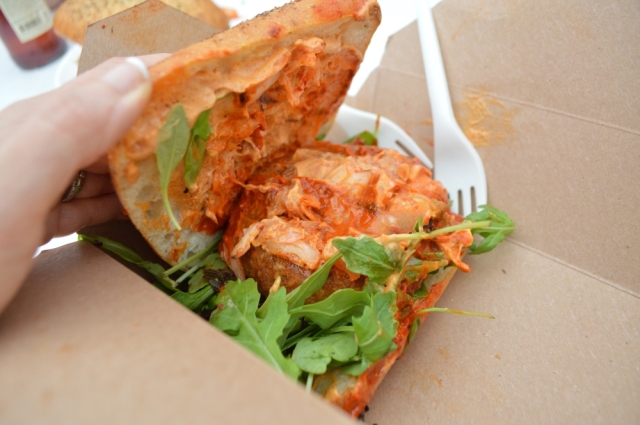 My only regret was not getting donuts to take home. Sigh.

Right after we had lunch we grabbed some kombucha. I’ve gotten my mom hooked and we both drink it just about every day. The kombucha they were selling was pineapple ginger, and it was sooo good. 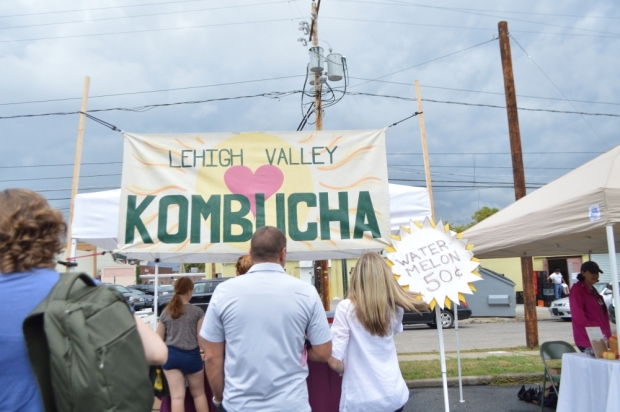 We did a take a small pause to listen to some live music, and pet some of the dogs that were there. By the Catskill Animal Sanctuary table, we met a beagle named Max, who is looking for a home. He stole both of my parents’ hearts and they were seriously considering it for a while. We also stopped by the Pig Placement Network again and pet some pigs. How could anyone want to kill one of those sweeties??

The Veggie Kid’s Zone had a face painting, coloring, and a neat veggie quiz where we won a few apples.

Here is the section of this post with all the picture spam of the Vegan Treats desserts.

My mom and I did all the ordering and picked a few things that jumped out at us. Honestly, it’s so hard to choose at Vegan Treats. This year, I got a Raspberry Mousse Chocolate Mousse cake (the one with the purple flower), the Dulce De Leche Cake, and a Chocolate Cannoli. 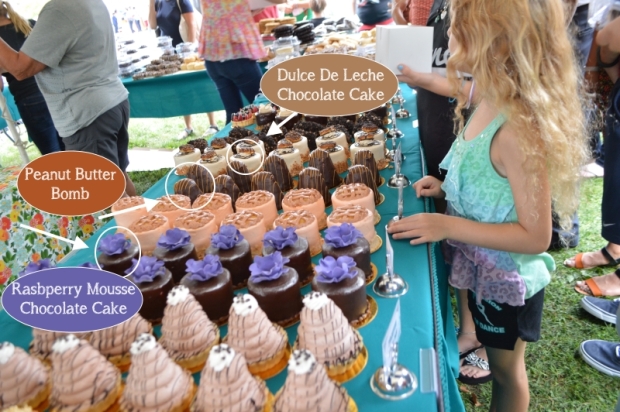 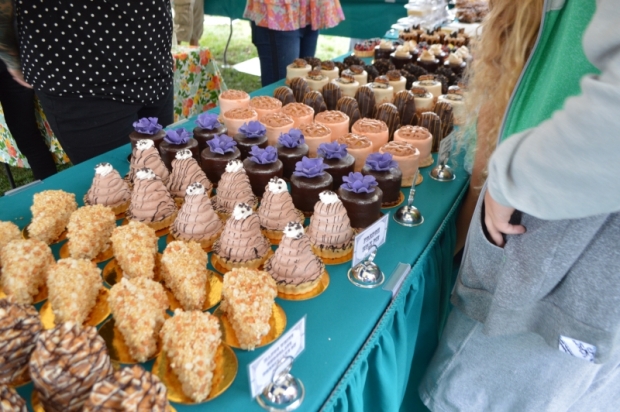 I totally missed the Chicken and Waffles donut that was down at the other end, and I’m kicking myself for not getting the Triple Chocolate Peanut Butter Chunk Cake (bottom left corner). There’s always a huge crowd of people around their table, but they’re super quick about helping people. 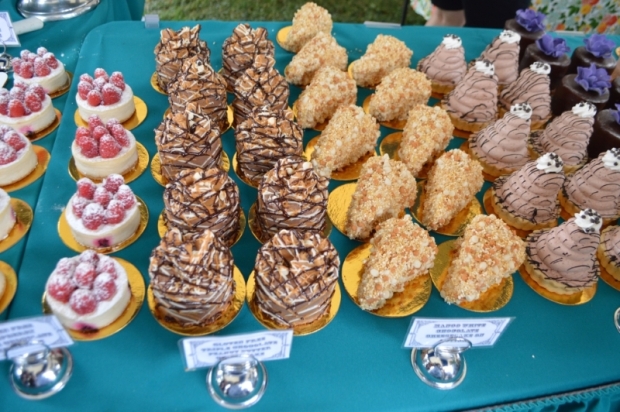 We got the Vegan Treats to go, and I was really hoping to eat some other food there, but I was still stuffed from the burger. I also wanted to try the ice cream from Alchemy Creamery, but I felt like I might puke if I tried to eat anything else.

My mom really wanted to grab a vegan hot dog, but she was stuffed too. 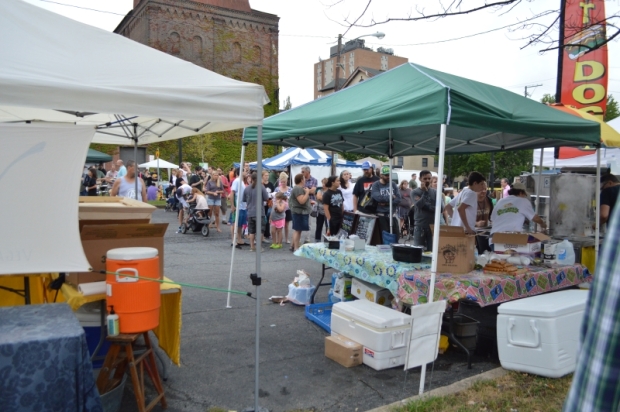 I didn’t end up shopping at much as last year, but I did grab a few bottles of wine from Franklin Hill Vineyards before we left. I think I got the Sir Walter’s Red last year too, it’s one of my favorites. I also got the Fainting Goat, which is a black cherry wine, and gave it to my mom.

I should’ve taken pictures of our treats before we left since they got a little smashed on the way home. It’s okay though, they still tasted wonderful. I didn’t realize the Dulce De Leche cake had so much coconut, but that’s the one my husband ate and he really liked it despite not really liking coconut. 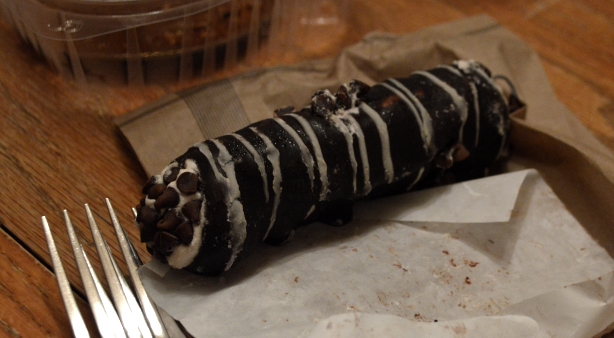 The raspberry mousse was so rich and decadent. I felt like I was going to go into diabetic shock after all the fondant and ganache, but it was so worth it.

There were layers of raspberry mousse, vanilla mousse, chocolate mousse, and chocolate cake, all covered in chocolate ganache.

We had a great time at the Bethlehem VegFest. It’s one of the few events that I look forward to every year, and I hope it continues to grow!

Check them out on Twitter and Facebook to stay up to date for announcements for next year!